Ugh
Wah
Ugh
Ummmmm
Yo
SHAGGY
Ugh
Yo
This one goes out to all my women yah know
My strong women, ugh

[Verse 1]
So amazing how this world was made
I wonder if GOD is a woman
The gift of life astounds me to this day
I give it up for the woman
She’s the constant wind that fills my sail
Ohhhhhh that woman
With her smile and her style,my
She’ll protect like a child
That’s a woman

Woke up this morning
I got up with the scent of a woman
Jus picture if you could what life would be
Ain’t much good without a woman
She can nag and be a constant pain
Ohhhh that woman
But those hips she’s got me whipped
And it’s just to hard to resist
What a woman
Ugh, hey

Tender lips that’s so so sweet
Gentle words she softly speaks
Such an angel when we need
GOD bless the ground beneath her feet
She can take you on a high
Be your comfort when you cry
But if you look into her eyes
You’ll see the strength of a woman
Strength of a woman
Ugh, ugh, ugh

Strength of a woman

The tally is impressive. His 2000 MCA album Hotshot rides high at #1 on the Billboard Top 200 for six weeks, hitting #1 in over 15 other countries as well; the album certified platinum six times over in the U.S., with more than 10 million copies sold worldwide; “It Wasn’t Me” and “Angel” both #1 singles here and abroad. Yet Shaggy would be the first to tell you: luck had nothing to do with it. In fact, no one could have worked harder to convey a musical vision than the Jamaican born, New York-raised reggae superstar. Now, Shaggy is back with Lucky Day, a new album that expands that vision, raising the stakes both musically and emotionally. And this time, it’s for the ladies.

“This is a very uplifting, pro-woman album,” says Shaggy. “When I look back at the people who shaped me, that made a difference in my life, most of them were women: the mother of my children, my own mother, so many of the people I’ve worked with. So why not pay homage?” That indeed is what Shaggy does on Lucky Day, which boasts a sensational line-up of songs that celebrate women in all their complex glory.

To make the album, Shaggy kept close to home, recording at his own New York-based home studio and Big Yard Studios, and working with long-time friends and producers Robert Livingston, Sting Intl., Dave Kelly and Christopher Birch. He also brought in guest performers like singers Barrington Levy (on “Full Control”), Chaka Khan (on “Get My Party On”) and Big Yard/MCA solo artist Rik Rok (on “These Are The Lips”). Shaggy himself wrote or co-wrote all fourteen songs. He also had a hand in producing the album.

Given the remarkable success of Hotshot, Shaggy felt surprisingly little pressure this time out. “We wanted to make it dope, but everything ended up being done very quickly,” he recalls. “The success last time gave me the freedom to go into the studio with the people and songs I wanted.” That freedom rings true from the opening cut to the final fade-out.

Songs like the mad funky “Shake Shake Shake,” “Hookie Jookie,” and the title track thrust Shaggy into deep Dancehall mode as he salutes the beauty and sexual power of women. “These songs are young and wild,” says Shaggy. “They have humor, but also a certain maturity to them.” With its lonely solo trumpet and flamenco flourishes, the premiere single “Hey Sexy Lady” offers a humorous take on the bold and the beautiful banging the headboard in the room next door.

Shaggy soon shifts to a more serious vein with tracks like “Walking In My Shoes” and “Lost.” The former offers a message of hope and empathy that crosses racial, gender, ethnic and national lines; the latter powerfully addresses the thug life as seen through the eyes of loving family members. The melodic “Full Control” preaches liberation to and for women, while “Strength of a Woman” and “These Are The Lips” are as understanding and positive as love songs get these days. “How many ways can you say I love you?” asks Shaggy. “It’s not what you say but how you say it, so when I make records, I try to see things from a new angle.”

With the upbeat and prayerful “Another Day,” Shaggy completes the cycle, going from five-alarm booty call to celebrating the virtues of woman to thanking the Almighty for the gifts of life. “On every album, I include a song that gives thanks and praise,” notes Shaggy. “You have to remember God in what you do; He makes everything possible.”

True, but Shaggy has never given less than 100% in shaping what has become an extraordinary artistic career. He was born Orville Richard Burrell in Kingston Jamaica. As a kid, his friends nicknamed him “Shaggy” after the character from “Scooby Doo.” From the beginning, music was his passion. Leaving Jamaica at the age of 18 to join his mother in Brooklyn, NY, Shaggy soon began pursuing a musical career. He got a major boost when his “Mampie” and “Big Up,” both hard-core dancehall tracks, hit #1 on theeee reggae charts. Shaggy joined the U.S. Marines in 1988, and a few years later, found himself fighting in the Gulf War.

International success began with the 1993 release of Pure Pleasure, his debut album. The single “Oh Carolina” became one of the biggest hits in U.K. pop history, and went on to top the charts in nine other countries. With his 1995 album Boombastic, Shaggy found U.S. success at last. The platinum-certified album won the 1995 Grammy Award for Best Reggae Album, while the title track topped Billboard’s Reggae, R&B and Rap charts (it hit #3 on the Pop charts as well).

“Boombastic” also hit #1 across Europe. Along with the hit title track, the album featured a lively update of “In The Summertime” and a sensational version of “The Train Is Coming,” featured in the film “Money Train.” In September 1996, soon after finishing his 1995/1996 world tour, Shaggy returned to the studio to record his third album, Midnite Lover (1997). By then, his diverse pop, reggae, R&B, and worldbeat audience had been solidly established. He contributed songs to such soundtracks as Speed II, Jungle To Jungle, and How Stella Got Her Groove Back.

With his new Big Yard/MCA label readying a slate of releases and Lucky Day ready to drop, Shaggy has a minimum of slack time these days. But it’s all good as far as he’s concerned. “I love making music,” he says. “My main thing is to make people smile. My aim is to have you put my record in your CD player and not skip a single track.” On Lucky Day, as always, his aim is true. 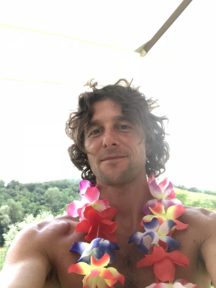